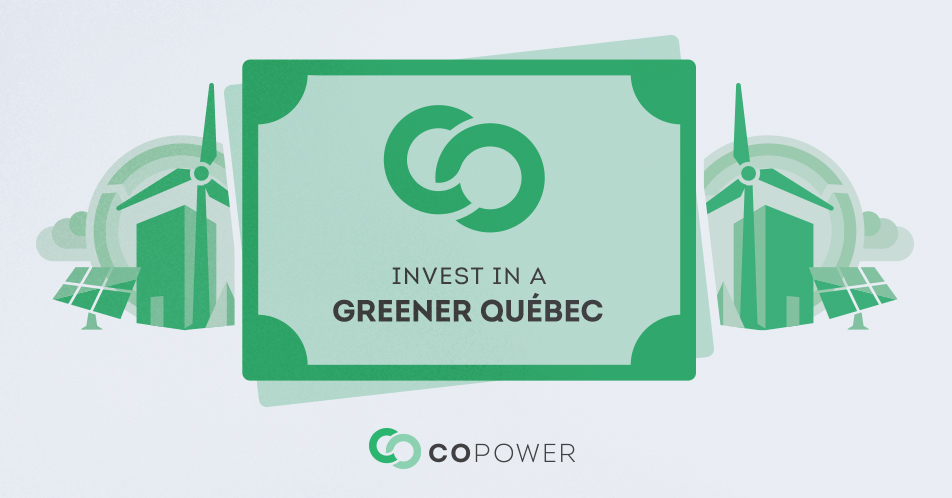 Earlier this year, two Green Bonds were issued in Quebec, each representing a significant first.

On February 24th, the Quebec Government issued its first provincial Green Bond, a $500 million issuance yielding 1.67% annually, the proceeds from which are used to fund sustainable public infrastructure projects. Like most government green bonds, Quebec’s were limited to major institutional investors and sold out the day they went on sale.

The following week CoPower launched a $20 million Green Bond for the rest of us. Our 5 year Green Bond offers 5% annually over a 5 year term and represents the first opportunity everyday Quebecers have had to invest in local clean energy projects.

As a company with Montreal roots, we were especially proud in May to announce the first Quebec-based projects to back CoPower Green Bonds: a portfolio of residential geothermal heating and cooling projects.

Reducing carbon one clean energy project at a time is good, but Green Bond financing is at its most powerful when it spurs the growth of clean energy industries. That’s why we’re proud of the catalytic role our bonds are playing in supporting Quebec’s geothermal industry.

The story begins with Marmott Energies, a Montreal-based company known for pioneering an innovative model called as “geothermal-as-a-service,” similar to “solar-as-a-service” employed by companies like Solar City, and credited with popularizing residential solar rooftops across the United States.

The challenge Marmott addresses is that geothermal technology remains prohibitively expensive for the average homeowner, often costing over $30,000 to own and install. Despite impressive energy and cost savings over the lifespan of the project (which can be 20 years or more) the initial upfront cost is often hard to justify in a household budget.

Marmott is changing all that. Rather than selling $30,000 systems, the company installs, owns and maintains the technology, allowing homeowners to pay a fixed monthly fee for heating and cooling services. These payments replace heating costs and reduce energy bills from cooling. In other words, Marmott acts as a mini-utility in your basement.

Innovative new business models like Marmott’s require innovative financing, and that’s where CoPower Green Bonds comes in. Your investment helps provides Marmott with the financing they need to foot the up-front costs of installation and equipment, allowing them to offer their services to more homes across Quebec.

Getting Quebec homes off oil

Quebec can boast some serious green credentials, with 99% of electricity generated by clean hydro. So it’s a surprise to many to learn that nearly 300,000 homes, approximately 13% in the province, still rely on carbon-intensive oil furnaces for heating.

We believe residential geothermal systems enabled by CoPower Green Bonds can play an important role in helping Quebec meet its ambitious goal of a 40% reduction in oil consumption by 2030. The combined impact of the one portfolio of geothermal projects CoPower has financed already is 186 tonnes of CO2 avoided annually.

Best of all, by employing creative financing strategies and supporting new business models, we can hit these targets and in doing so create win-win-win opportunities for investors, homeowners, businesses, and the planet.

CoPower’s Green Bonds offer up to 5% interest annually and are available through CoPower’s online platform as well as through select financial advisors and brokerages. Get started as a clean energy investor at https://copower.me/en/

This article was written by David Berliner.

Biography: David Berliner is co-founder and CEO of CoPower. He previously worked at Inerjys, a clean energy investment firm. David has been named “Emerging Solar Leader” by the Canadian Solar Industries Association and “Top 30 Under 30″ by Corporate Knights. David holds an M.P.A. from Columbia University and a B.Sc from the University of Toronto.